Trustworthy site offering high-quality online sports and casino betting for nearly 20 years.
Huge list of sports (tons of wagers per sport) and a robust selection of casino and arcade games.
Live streaming of games in real time makes in-game betting a cinch. Funded account required or have placed a bet within 24 hours. 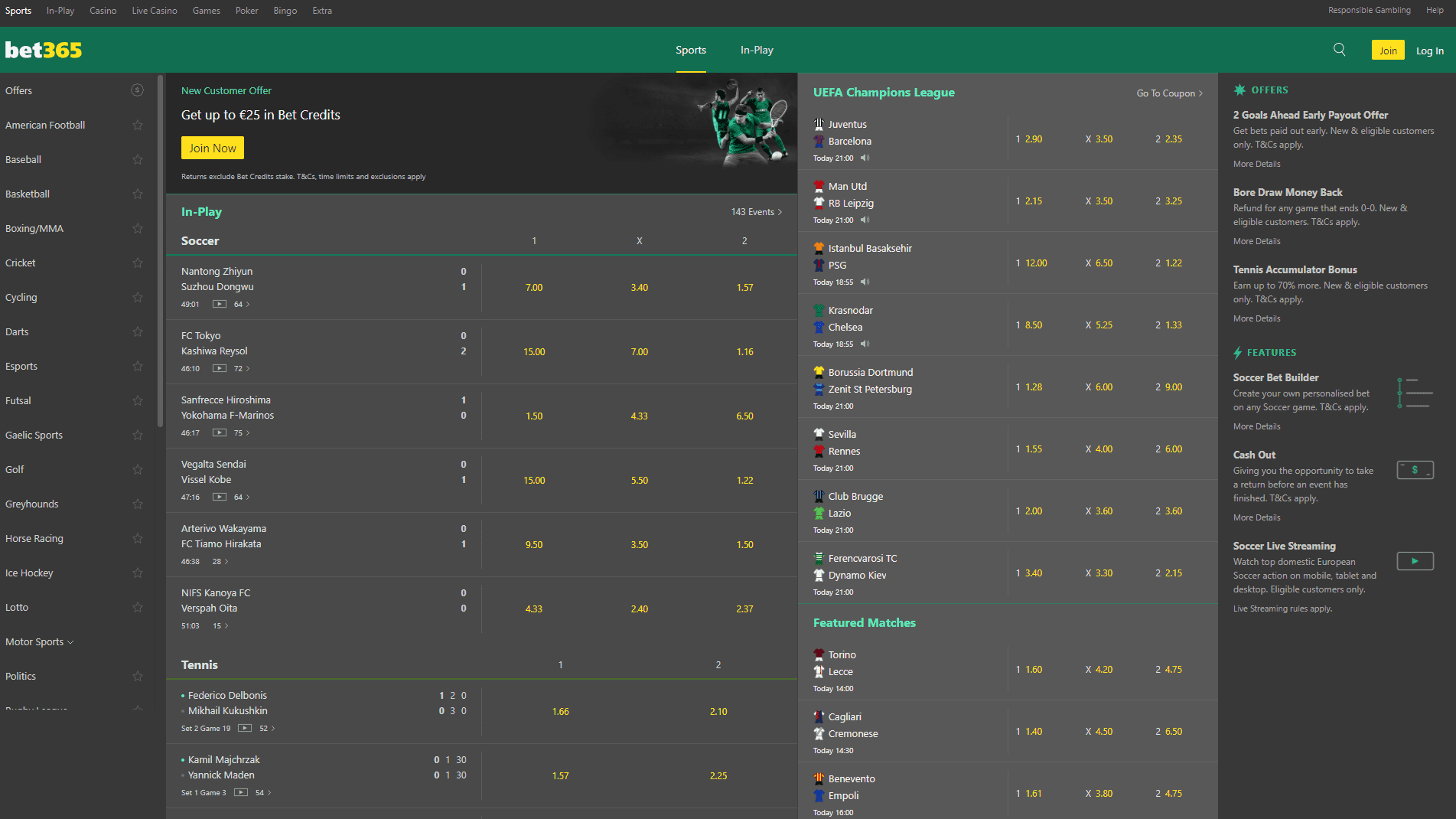 Few sites are as synonymous with online sports betting than the powerhouse that is Bet 365. One of the most popular betting sites in the world, Bet 365 has millions of users and deals in billions of dollars each year. I know plenty of online gamblers who swear by this site, and I don’t blame them. There is a lot to love about Bet 365.

Not only is Bet 365 held in high regard by many of its users, but it has also received wide critical acclaim, winning a number of awards and honors over the years. At the eGaming Review Operator Awards, for instance, in 2010 (hosted by eGaming Review), Bet 365 won the coveted “Operator of the Year” award. In the Sunday Times Profit Track 100 league, a coalition that ranks private UK companies based on rate of profit growth, Bet 365 placed third. Similarly, in the Sunday Times Tech Track 100, Bet 365 was also mentioned as one of the most rapidly growing privately owned tech, media, and telecom companies.

Bet 365’s accomplishments do not stop there. The site was also named the number one internet gaming company, again by eGaming Review, in 2010, 2011, and 2012, with 2012 also coinciding with the year Bet 365 was listed on the publication’s annual Power 50 list of the 50 most influential online gaming companies.

Again in 2012, Bet 365’s CEO, Denise Coates, received a CBE along with the Queen’s new year honours list that celebrates services to the community and economy. And in 2013, Coates was listed by Women’s Hour (a part of BBC Radio 4) as one of the top 100 most powerful women in the United Kingdom. It is hard to overstate how influential and powerful Bet 365 has been in the UK over the last decade or so.

Bet 365, though, does not appear to have any intention of slowing down in the decade to come either. With an Alexa ranking of 199, this multi-billion Pound enterprise seems to do nothing but grow, in both profitability and in popularity. This, of course, bodes well for all of you would-be gamblers out there. More money to go around always means bigger potential earnings. And if you are looking for a site that has stood the test of time and legitimacy, look no further than Bet 365.

Bet 365, interestingly enough, was founded in a portable building in Stoke-On-Trent by none other than Coates herself. She began to conceive of the company in the year 2000; by March of 2001, she had the site up, running, and launched. Coates and company borrowed an initial £15 million from RBS.

This sum of money was borrowed against the Coates family’s famous betting shop estate, which had been founded by Peter Coates in 1974 and run by Denise Coates between the years of 1995 and 2001. By 2005, however, Bet 365 had sold the entirety of its chain of betting shops to Coral for a cool £40 million, allowing Coates to pay off her loan in full (and then some).

From there, it was just a matter of asset growth for Bet 365. In May of 2012, Peter Coates, Bet 365’s chairman, struck a deal with Stoke City club which set up Bet 365 to be shirt sponsors for the club. Bet 365, in the coming years, also became the sponsor of the club’s stadium for 6 seasons. All of this growth and hard work, it turns out, certainly paid off.

As of March 2018, the total wagers placed on sports on the site was reported to be £52.56 billion. Revenues were reported as £2.86 billion. And an operating profit was reported of £660.3 million. Bet 365 is now an institution of online sports betting and is definitely not going anywhere any time soon.

Clean, user-friendly, responsive, and experiential site design can be difficult to pull off when your content is, by definition, so data heavy. Sports match stats, in other words, do not necessarily lend themselves terribly well to sleek and modern site design. At least not without a lot of ingenuity and creativity. Bet 365, however, appears to have come pretty close to cracking this code.

Although the site may look a touch overwhelming when you first arrive on the home page, once you learn the format and layout it starts to seem very intuitive. There is a method to what may appear to be madness, don’t worry. There are lots of tabs and charts, though, so let’s break them down so that you are not taken aback when you visit, shall we?

On the left-hand side of the page, spread out vertically, you will find a comprehensive and helpful site menu bar, listing every sport on which the site takes bets. Quickly navigate from soccer to boxing to snooker in a matter of seconds. Also, easily mark a sport as your favorite by clicking the ‘star’ icon on its tab. This is an excellent map of the site. Start here if you are confused by the barrage of stats that takes up the rest of the home page.

These stats, however, are live updated, in play, and can be cycled through by sport as well. The roadmap, so to speak, with the design of this site is going to be made clear through what items are highlighted. Much of the site is much duller, in general, than the selections that you make that change the ways in which the data is presented.

For instance, highlight the “Soccer” icon at the beginning of the chart in order to access soccer stats (you can do this for other top sports as well); when this icon is highlighted, you have a clear cut indication of what live stats you are browsing, as well as an easy way to toggle between your favorite sports. Aside from that, you’ll also find Top Events, live play highlights, betting news, sporting news, and a few other useful tabs for making the most informed bets possible. Oh, and I can’t forget about the easily accessible cash-out tab, for when you want to quickly take your money and run!

More impressive, though, than the list of sports that Bet 365 offers, perhaps, is the list of wager types that can be placed. Using soccer as an example, here is a full list of all of the playable wagers: Full time result, Correct score, Total goals, Draw, no bet, Handicap result, Anytime goal scorer, Double chance, Half-time/Full-time, Both teams to score, Winning margin, First goal scorer, Time of first goal.

The good news, though, is that this spread is available for just about every sport, not just soccer. The possibilities for winning real money on Bet 365 are widespread. What is also on the rise with Bet 365 is eSports. Although I haven’t really dabbled much in eSports myself, once again, Bet 365 has one of the largest wager types on the net.

The feature that committed users of Bet 365 often cite as their favorite is how effective it is at live in-game betting. Why is Bet 365 so superior when it comes to live betting? Well, it probably has something to do with the fact that Bet 365 also offers live streams of many of the matches so you can watch along as you bet, where a funded account required or have placed a bet within 24 hours. I don’t believe that I have ever seen a more streamlined, convenient, and easy to use online betting site in my entire life.

There are plenty of arcade games for you to play as well. With a solid blend of classics, arcade games, and fun franchise spinoffs, the fun will never run out. The online gameplay here is great, too, and many of the games have surprisingly excellent graphics. Here are a few of the video games featured on the site’s arcade section: Age of Gods (series), Heart of the Jungle, Justice League, Plenty O’ Fortune, The Matrix, Space Invaders, The Three Musketeers, The Mummy, Rocky.

Add onto all of this classic casino and gambling staples, such as poker, bingo, blackjack, and roulette, and you may find that you never want to leave Bet 365.

Bet 365 offers 2 separate apps: 1 for its sportsbook and 1 for its casino/arcade. The sportsbook app, unfortunately, appears to be a bit glitchy – so, at least for the time being, your best bet (if you will) is probably going to be to make use of the desktop site. Until a few pesky bugs can be resolved.

As far as the casino app is concerned, gameplay seems to be just as smooth as it is on the desktop site (in fact, I think it might be just a tad bit better, if I’m honest). Games are always best played on apps, though, if you ask me.

There is no fee for membership. Sign up, fill up your account with what you feel comfortable with, and start betting today!

Although there may be no such thing as the perfect online sports betting site, Bet 365 comes about as close as it gets. The site is very user-friendly, bettor-friendly, and competitive. Jackpots, then, can get very interesting. Live streaming of matches makes for impeccable in-game betting. The site seems to only continue to improve, year after year. And there is a good chance, given Bet 365’s longstanding history of striving to provide a quality product, that it will continue to progress with time.

Of course, when it comes to finding the best sports betting site, the bulk of it can be rather subjective. So, just because I personally love Bet 365, that doesn’t mean that it will be ideal for you or your betting style. I do think that there could probably be more of an effort made to provide live sports news as it occurs, as this can often affect a bet.

So, finding the right site for you is likely going to be a process of trial and error. That being said, I still highly recommend giving Bet 365 a try. I have a feeling that anyone who loves online sports betting will find much to love about this site. Even those who don’t care so much about sports betting will still be able to have loads of fun on the site’s online casino and arcade.

SEE MORE BETTING SITES! Check out the biggest and most up to date link list!
Bet365
visit Bet365
Rating Global