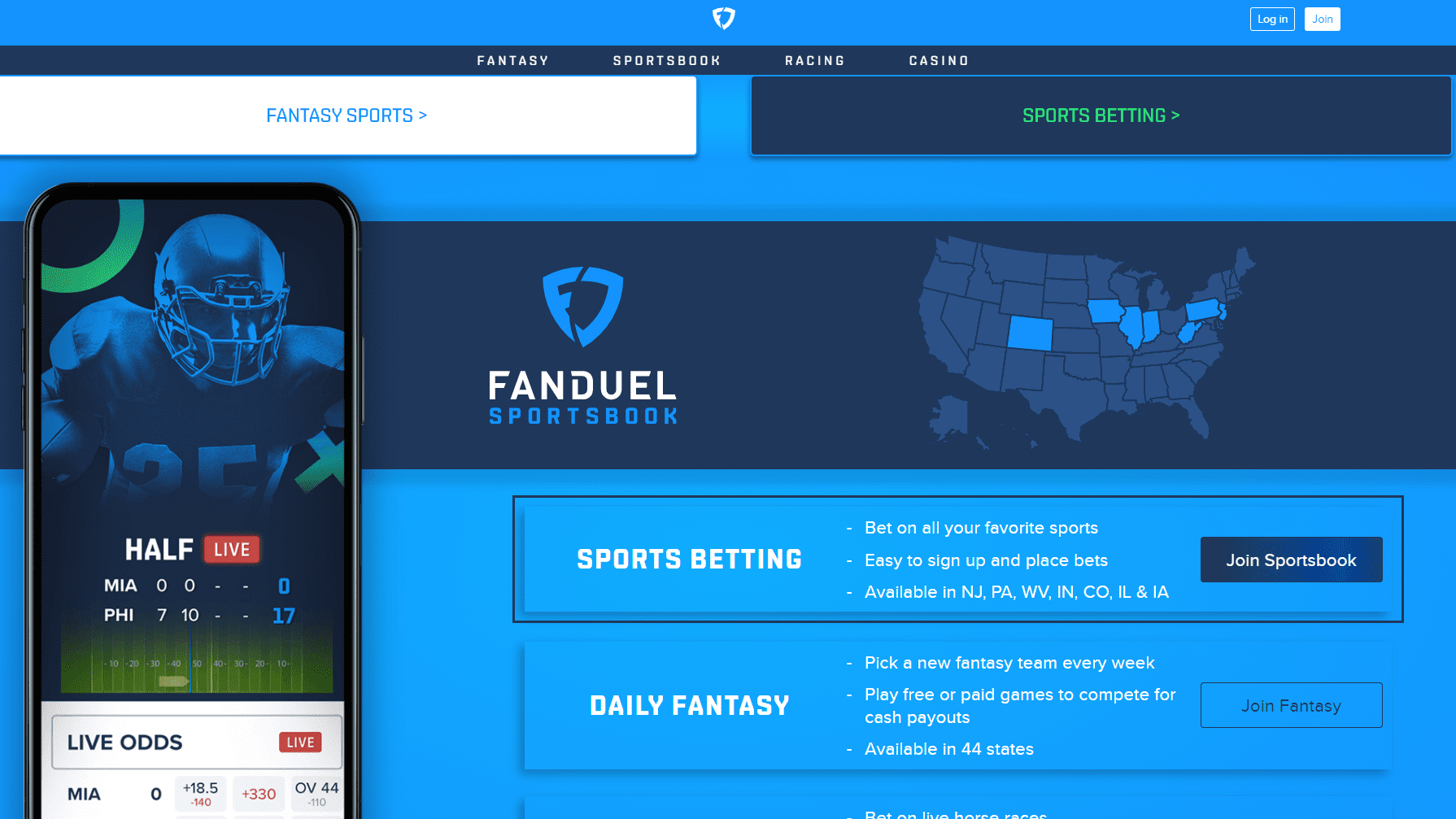 When talking about online sports betting and daily fantasy sports providers, it is impossible not to bring up Fan Duel. As the second largest online resource for fantasy sports (trailing just behind Draft Kings), Fan Duel is a fan favorite for millions of users. In fact, I know a lot of people who swear by it, especially in light of Draft Kings seemingly constant controversies and criticisms. If you are looking for a trustworthy website for all of your sports betting and fantasy sports related needs, I highly recommend giving Fan Duel a go – especially if you have been disillusioned by Draft Kings or know someone who has.

Plus, if we are to look at earnings potential alone, Fan Duel becomes even more alluring. This giant sports betting site is expected to pay out over $1 billion in 2020. The site has so much to offer, including ridiculously large prize pools and guaranteed prize pool contests that make Fan Duel a must-try sports betting and daily fantasy sports provider.

It can be a somewhat arduous task, to try and narrow down which sports betting site is going to be right for you. There is just so much at stake. Especially when it comes time to actually put real money into a given site. You need to be sure that you are using a site that can be trusted, one that has a longstanding reputation for honesty, winnings, and timely payouts. Fan Duel, however, seems to tick all of the boxes. I just started using Fan Duel recently and, honestly, the only reason that I am kicking myself is because I haven’t been using it for years already!

That is, of course, not the only thing that matters when weighing your options, but it is a crucial one. Another thing that you need to take into account is a site’s sportsbook size, the size of betting pools, how easy to use the site is, whether it is mobile-friendly or not, and how many bonuses and promotions the site offers. Fan Duel, once again, on all counts, is very impressive. I don’t want to say prematurely that this could be the best fantasy sports betting site for 2020, but I am definitely leaning towards giving Fan Duel this accolade.

Don’t just take my word for it, though. Fan Duel has received an immense amount of positive press and cosigns over the years. The site has been promoted and praised by the likes of Fox Sports, the New York Times, Yahoo! Sports, and The Wall Street Journal as well. So, if a sports betting site with a great reputation is what you are looking for, Fan Duel seems to have this in spades.

Although NFL fantasy football is the site’s most popular feature, that is not all that Fan Duel has to offer. The site offers plenty of games in just about every major sport, including hockey, baseball, and basketball. Unfortunately, though, at this time, Fan Duel is only legal to use in the United States and Canada. This might be the site’s fatal flaw. However, it is not necessarily the fault of Fan Duel. It would just be nice if the site had a larger reach. Still, though, that is not to say that Fan Duel couldn’t, sometime down the road, expand to become a more international enterprise.

There is so much to love about Fan Duel. I doubt I’ll be able to cover every single aspect in this one review. I am going to do my best, of course, but the only way to truly experience all that Fan Duel has to offer is to sign up and begin exploring the site for yourself. That being said, let’s dive in, shall we, and see whether Fan Duel looks as great to you as it does to me.

In 2010, Fan Duel held a massively successful promotional campaign, which took the form of the “Fan Duel Fantasy Football Championship,” abbreviated to FFFC. The event was comprised of 10 lucky users who won entry by winning a qualifying league tournament throughout that year’s NFL season. The first-place winner of this event won $25,000; the total prize pool amounted to $40,000.

In 2011, Fan Duel went public with the fact that they had secured $11 million at the close of their series C funding round. And in 2014, the company boasted another $70 million at the end of series D funding. By the time Fan Duel made it to series E funding status, they had secured a whopping $275 million, which pushed the company’s valuation well over the $1 billion marks. That is the kind of exponential growth that you hope to see from a fantasy football provider such as this one.

It did not take long for Fan Duel to enter its acquisitions phase after breaking the $1 billion valuation. First, Fan Duel acquired the well-known sports analytics company, Number Five. Then, in September of 2015, the company went on to purchase the eSports daily fantasy football company Alpha Draft. And in October of 2015, the New York Times reported that an employee at Draft Kings made $350,000 on Fan Duel.

In 2016, Draft Kings and Fan Duel publicly announced their intent to merge their two companies, which would have resulted in the conglomerate company serving 5 million players total. The following year, though, the Federal Trade Commissions (FTC) blocked this measure om grounds that it would give the conglomerate control of 90% of the total fantasy sports market, resulting in, effectively, a fantasy sports monopoly. Thankfully, this merger has since been abandoned.

When it comes to site design, few online sports sites come anywhere near topping Fan Duel’s intuitive, sleek, and polished website. Fan Duel is on the cutting edge of fantasy sports betting site design, offering a very modern and elegant looking website that is just as easy to use as it is easy on the eyes.

This becomes immediately clear the very moment that you land on Fanduel.com. The site’s home page asserts itself in an extremely responsive and experiential way, offering bold, bright colors that catch the eye, and graphics that keep you scrolling down for more. Actual gameplay, too, is as intuitive as it gets.

Fan Duel has made online sports betting and fantasy sporting as simple as it should be. The process is incredibly intuitive. Scroll through a list of contests. Enter one. And choose your lineup. That’s all there is to it when it comes to playing fantasy on Fan Duel. Easily scroll through team rosters, enjoy quick access to stats, and click the “add player” button. Set your final lineup, and, boom, you’re good to go.

The rest of the site, too, is just as user-friendly and intuitive. Honestly, I wish that every sports betting, fantasy sports, and online casino could look this good. All you other sporting sites should go visit Fan Duel right now and start taking notes! This is how it’s done…

Fan Duel is separated into 3 main sections, all of which have tons of offerings and features of their own. Here are the 3 realms, if you will, of Fan Duel…

Here, you are able to bet on all of your favorite sports (see the list above for all offerings). It is extremely easy to place bets and cash out. It may not be the largest sportsbook in the world, but there are tons of matches, wagers, and bets to be placed. You certainly won’t run out of action. Unfortunately, the sportsbook is only available in New Jersey, Pennsylvania, West Virginia, Indiana, and Colorado.

The fantasy section of the site allows you to pick all new fantasy teams every single week. Here, you will find both free and paid games that allow users to compete for cash payouts. Online fantasy is available in 44 states.

A classic staple of the gambling world. You can bet on live races. There are new races every 5 minutes. And this feature is available in 23 states.

Tons of your favorite casino games can be played here any time of the day or night, any day of the week. Casino games also offer real cash payouts and Fan Duel is famous for offering very generous promotional bonuses. Visit the Fan Duel casino either on the Fan Duel site, or through the Fan Duel Casino and Sportsbook app.

I’m not alone in loving this app either. The Fan Duel app (which is available for iOS or Android, by the way) has an average user rating of 4.8 out of 5 on the Apple App Store. It seems like Fan Duel just keeps getting better and better the further into it I look.

If you are looking for one of the best fantasy sports platforms in the world, look no further than Fan Duel. Sure, Draft Kings may have louder promotions and more brand recognition, but millions of users swear by Fan Duel over Draft Kings … and for good reason. Fan Duel offers some of the best site design I have ever seen (from any site, let alone sports betting sites). It has great bonuses and payout options. It offers plenty of matchups, wagers, bets, and puts you in total control of the action. Add to that a great online casino, sportsbook, and horse racing bets and you have the makings of what could be the best sports betting site!

SEE MORE BETTING SITES! Check out the biggest and most up to date link list!
Fanduel
visit Fanduel
Rating Global